Here is a reprint of the text of Donny's obituary as published in the  the Virginian Pilot newspaper...

Virginia Beach - Donald Douglas Ziegelbein, 62, died from neuroendocrine carcinoma on November 3, 2016. Donny got strength and comfort from his family and many friends during his illness. His mother, Shirley H. Ziegelbein, predeceased him. He is survived by his daughter, Megan Ziegelbein; his father, Douglas Ziegelbein; his sisters, Theresa Davis (William) and Sarah Satterwhite (Jim); two nephews, one niece, a great nephew, and a legion of friends, all of whom loved him dearly.

Donny was a talented musician, athlete, and sportsman. He shared his love of music and his friendship with countless people throughout his life. He performed as a solo artist, and with numerous musicians throughout the country. Donny's greatest gift was his love and devotion to his daughter, family, and friends.

"The Value of a Friend," from a friend. 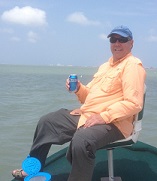 As one of the "legions of friends" mentioned in the obituary above,  I take this opprtunity to share one recollection of a young Donny Z that most of us first met in Port Mansfield.  It was back in 1989 or 1990 when Donny first performed "Go Down There" on the wobbly waterfront deck of the original Cap'n Jack's Windjammer Restaurant. In front of the ENTIRE tournament (maybe 50 of us), that tune was immediately and enthusiasticly adopted by the Tournament as the JPG Theme Song.  It was later studio recorded, featured in the first JPG video, and even played for brief time on the old Bob Stephenson Saturday morning fishing show on KILT 610 AM radio.  Everyone commented on how perfectly it fit the JP Tournament, except maybe the one line about pink flamingos??  (We figgered Donny didn't know a pink flamingo from a roseate spoonbill.)  I, like everyone else, assumed Donny wrote the song specifically about fishing in the Laguna Madre with lyrics like "Miles of water, miles of empty beach"  and "A warm south wind to blow your cares away," but when I cornered him (between a keg of beer and a bottle of rum), about how he came up with such a perfect anthem so fast, he reluctantly admitted that "Go Down There" was written about a previous trip of his to South Florida. (ah-HA! That explains the pink flamingos!)

It didn't take long for Donny to pen another tune, less about the location, and more about the friendships, the fellowship, and downright brotherhood that has grown between literally hundreds of us, over what is now 30 years of the JP Griffon Memorial Fishing Tournament.  Donny's song "Value of a Friend" captures in one line, what comes so clumsy for most of us to articulate, "We may not see each other but once in a while, it all rushes back with a wink and a smile."

As "the stories fly, and the fish fry," we will miss the wink and the smile from our good friend Donny Z.  "Maybe one day, heaven might compare,  but till then..." go with God mi amigo!  We will see you out there in the glare off the gin clear water... and in the glow of the South Texas sunset!  You showed us all the true "Value of a Friend"  and we are all a little better for having known you.

"Go Down There" Video

This performance was recorded at the original Windjammer, Port Mansfield, Texas, May 14, 1993, and features Donny Z and Paul Horton

"Value of a Friend" Video

This performance was recorded at the original Windjammer, Port Mansfield, Texas, May 14, 1993, and features Donny Z and Paul Horton

This tournament ended on

Boat captains, please remember to wear your Kill Switch whenever the boat is underway!